Congratulations to Hilary on her very first solo show.  Her new work (which she describes below) will be exhibited at Galatea Fine Arts in South Boston on Jan. 2nd. We can’t wait to go! 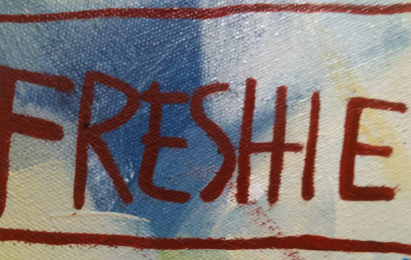 I would like to invite you all to save the date for this spectacular event! The night will be filled with Art, Friends, Family….and of course fine wine and cheeses!

As most of you know I have been working on a new series for this show. This series of mixed media paintings developed from an interactive study of couples. Interviews, either in person through video recording or by written letter, were conducted. Each couple’s interview was then interpreted onto one canvas or panel. The interviewer’s answers were a large part of my process. I either read or re-read the couples answers throughout the course of the painting or I watched the video as I worked. Keep in mind not all participating couples were romantic couples but people who shared a unique relationship, some were sisters, cousins, best friends, roommates, married, engaged, dating, mother and son, twins, and more! This series takes a personal and in depth look at the unity formed within a couple and how the individual lives inside of a couple. A sense of identity is at play and at question in these pieces.  Some find identity to be associated to their partner and some don’t. So at the end of it all we ask ourselves how much of our own identity is subjective to or independent from those in which we surround ourselves with most.  A meaning, an idea, an understanding are incessant.

So mark it in your calendars, forward along to your friends and family, and I’ll see you there!